Clear Path for Veterans is a non-profit organization located in Upstate New York that uses a diverse range of methods to help our veterans recover from the realities of war. Every day they help men and women with PTSD, MST, traumatic brain injuries and other mental and physical injuries on their road to recovery.

Dogs2Vets is a program designed for Veterans who believe in the healing power of the human-animal bond built through animal training. This is where TJ met Ranger and started on his path. 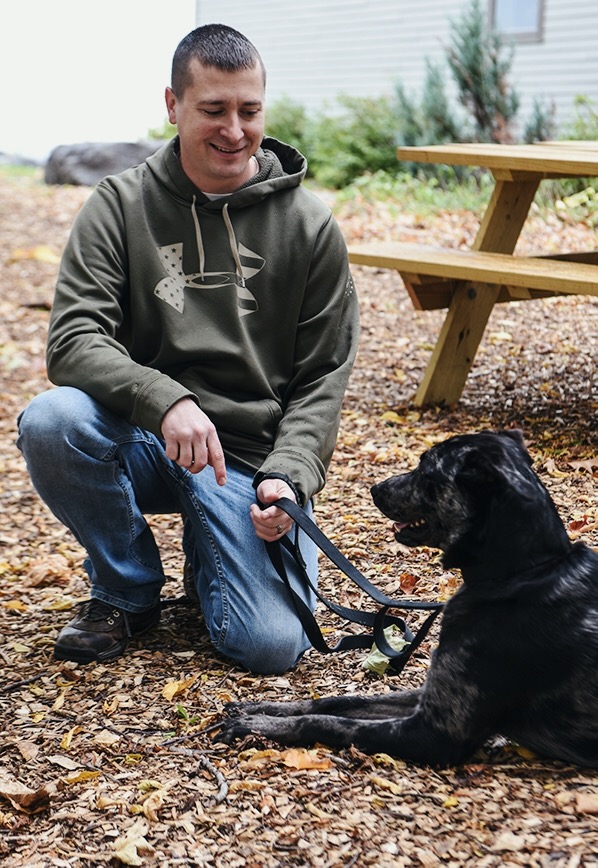 TJ, a tanker with the 2nd Tank Battalion, served in the United States Marine Corps from 2002-2006. In 2003, his service took him overseas to Iraq. “When people ask me about my service, all I can say is that it was some of the best times of my life and some of the worst times of my life,” he says. “My service taught me a lot about myself and what I am capable of.”

Just because his time in the Corps as an active duty Marine came to an end, didn’t mean that the issues he was struggling with were finished as well. “I dealt with a lot of alcohol abuse and drug abuse,” said TJ. “I knew there was help and a lot of programs out there that offered help to veterans, but I never took advantage of that. I always did my own thing and didn't think I needed help and never sought it. That led me down a dark path. Me being left to my own devices wasn’t working.”

After years of struggling on his own, it was his wife that led TJ to Clear Path for Veterans and ultimately to Ranger. “My wife was always asking, ‘What can I do do help my husband?’ but there was never really a clear answer from the VA or other vet centers. She told me about this program and asked what I thought about it, so I took some time and looked into it. I decided it was worth a shot and better than what I was doing on my own.”

TJ came into the program having never owned a dog and with a fair bit of skepticism about how the Dogs2Vets program was going to work for him. “I knew the basic function of a service dog, but I always thought that they were more for someone with seizures, or a blind person. I never knew how it would work for a veteran with PTSD symptoms. Like, what would he do for me?”

Ryan Woodruff, Manager of the Dogs2Vets program, had welcomed Ranger up from Texas about the same time TJ was coming into the program. Ranger was one of a few dogs that came to Clear Path for Veterans via Helping Hounds, a local organization that helps rehome rescue animals from all over the country. Ranger began his 30 day training while the Clear Path team was evaluating, testing, and training him to see if he had the temperament and drive to be a good fit for a veteran. Not all dogs that come through the program earn their “service dog” status. In many cases, their training helps them to be a companion and, quite often, that is exactly what their handler needs.

“It takes 10 minutes to know if you are bonding with a dog,” says Ryan, “and it was very clear that Ranger and TJ were a good fit. We had some small bumps in the road with Ranger where we weren’t sure if he was going to be a good fit for this, maybe he wouldn’t be a service dog, but what we saw in the early relationship building between TJ and Ranger was enough for me to say “this makes sense.” We didn’t focus too much on the behavioral issues, but more on the relationship building that was happening here. That was important for me and definitely important for them.”

Today, TJ and Ranger are inseparable. Their training is far from over, though. It is a constant process and they are always working toward new milestones. “Over the last two years, I have developed such an appreciation for the program and for Ranger himself. He’s just always there for me. He picks up on my issues, my anxieties and things that I am going though. He picks right up on it and he is right there to bring me out of stressful situations.”

Ranger has played an enormous role in TJ’s healing, from both his trials linked to his service and his struggles with drugs and alcohol. “When I started this program I was two weeks sober. I pretty much put all my efforts into not only staying sober, but training this dog. It just so happens that the length that I have been training him is the length that I have been sober. ” Nearly two years have passed since the pair have started working together.

During these last two years, the two have forged a truly incredible bond and TJ’s gratitude to his wife is clear to see. “I don’t know what I would have been doing had I not started training with Ranger. My wife saw where I was headed and it’s not a direction anyone wants to head in.”

The idea of a service dog for veterans to help treat PTSD, anxiety, depression and other stresses incurred as a result of serving one’s country, is still relatively new and in many cases is overlooked as a course of treatment. Clear Path for Veterans has proven service dogs and companion animals to be extremely beneficial. There’s nothing quite like a bond between a veteran and their dog.

Want to support Clear Path for Veterans and their Dogs2Vets program? Click here.